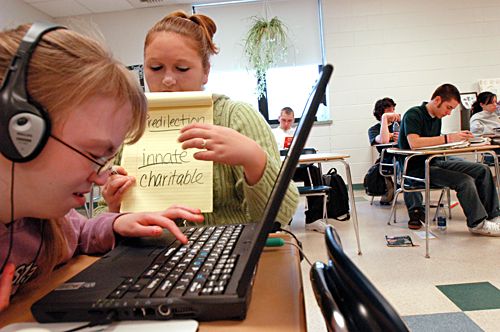 Image from Including Samuel Documentary by Dan Habib

My last post talked about how to balance the playing field between the parents and the professionals at IEP meetings, so that the team can come to decisions together about students with disabilities and the supports and services they require to succeed in school settings.

As important as it is to have the balance as I described, the even more important piece of creating an IEP that is what I call a “working IEP”, is writing the paperwork that supports the whole person in way that is useful and positive.

This is harder for teams to do than you might think. I have spent many hours both discussing with teams how IEPs can be written, as well as re-writing IEPs to reflect this, what would seem intuitive, way of writing and thinking about the person that it supports.

Individualized Education Plans are intended to be just that….INDIVIDUALIZED. Why then, is this not necessarily the case? There are many reasons, including lack of time, lack of expertise or understanding, general pre-set ideas of what an IEP can and should include, and the list goes on. Suffice it to say there are many reasons that IEPs can take on more of a cookie-cutter feeling than that of an individualized plan for kids.

To combat this, a student-centered mentality must reign throughout the meeting. I like to describe to teams that we need to take a “balcony view” – take the lid off the school day, or the student’s life – and look down as if we were watching from above. By doing this, and attempting to see what goes on from day to day, the interactions that take place, the people and the places as well as the times that they happen – we can start seeing the bigger picture, and start writing and talking about supports that are necessary for individual students with disabilities to be successful throughout their day.

Positive Language and Doing Away with the Deficit-Model of Thinking

The most important piece of creating a working IEP, I believe, is where teams start their conversation, and the language that is used, both during the meeting as well as the written words of the IEP itself. Simply (or complexly), language is everything. Positive language about the student and what he or she CAN do is the beginning of success in this process. The least dangerous assumption that can be made is that a person with a disability has value, is able, and deserves respect for their gifts and talents.

There are a million things that kids that need IEPs can do, and that is the most important place to start conversations during these meetings. Listing out what a person is good at; likes to do; is interested in; excels at; and when during the day these things are happening well – is the place to start thinking, planning and dreaming together as a team.

Many times, IEPs are written in ways that reflect the opposite – deficits are listed, issues and problems are highlighted, and the team problem solving around the individual, trying to decide what supports and services necessary, are at an extreme disadvantage from this position. There is a great body of research and practice that describes this deficit-model of thinking, and the negative impact it has on students with disabilities. Teams that start from this disadvantaged state of mind – thinking about what is needed or lacking – stay in this box throughout their thinking and planning together, and the IEP will fail because you will not be able to leverage the student’s strengths to overcome the obstacles they face.

One sure-fire way of starting with the positives is through using the WATI Assessment Forms before a meeting. The WATI Student Information Guides (all free downloads) offer ways of thinking about a student area by area. Use of these forms becomes more of a habit over time – so although initially, it may seem like a lot to think about before a meeting – over time it becomes routinized to the way you approach any IEP.

Examples of “Bad” versus “Good” IEPs

My next post will go into greater detail of specific things that need to be on an IEP for individual students with diverse learning needs. For the remainder of this post, I want to give some concrete examples of what “good” IEPs can look like through the lens of positive language and without deficit-model of thinking.

Consider the following examples of actual an IEPs I consulted on:

Background Information: James’ performance in all areas is inconsistent across the entire school day. His responses to questions asked are slow, due to his mental impairment. He has medical needs that require a one on one paraprofessional, whom is also a nurse. James does not do well in environments that have a lot of distractions, and is not motivated in activities that are not of interest to him. James requires repeated practice of new activities and skills, and this is best done in a quiet, separate space before attempting in a classroom environment. Additionally, James will often not attend to prompts given by adults to attend to the work he is doing. Peer supports are difficult, as James becomes silly and disruptive with peers, and because his verbal language is limited.

Background Information: James’ performance across the day and from activity to activity vary greatly depending on his current health/seizure status; the amount of distractions in his environment; and his level of involvement or interest in the activity. Days where James has not had a seizure impacting his learning are very focused learning days for him, and his interest and level of involvement are much higher than on days where he is tired physically from his seizures.

During days that he has had seizures, he has more success with new tasks which are introduced and demonstrated during a time of day or in a setting which has few distractions. This could be in a quiet library, study hall, or even in a part of the classroom that is accommodating in these ways.

James requires adults and peers to support his learning and engagement in activities through the use and understanding of various verbal and non-verbal prompting strategies; proper use of his communication device; and attention and teaching to the natural cues, consequences and corrections that exist for all students within a class. Additionally, attention to the wait time needed for James to respond is necessary, as well as an understanding of when to increase or fade the prompts given to him, increasing his independence on tasks or during activities. Some specific supports that have been successful for James’ learning have been gestural or verbal cues which remind him to look at the task he is working on. Frequently he will need repeated cues to maintain his focus on a task.

The difference I see between these two examples is enormous. A laundry list of negative things about James is not apparent in the second example. The ownership of the learning does not completely fall on James’ shoulders, it explains what he can do (he can respond, he can learn new tasks, he can be in settings with peers successfully), and how the adults and peers around him can support him in his learning. It also sets up the next sections of the IEP – the goals and objectives – to be written by starting with a positive outlook for James and his increased learning and independence.

The first example makes it seem as though James is unmotivated, requires a one on one adult, needs to be isolated to learn new things, and because he can’t talk – he defaults by being silly and disruptive. I ask you, before we even get into what educational goals and dreams there might be for this young man….which description does a disservice to this individual? Which description – just by negative language alone – would make a teacher – or a team of teachers – wish this person wasn’t on their case load?

Now consider the two following goals that were a part of Katie’s IEP:

“Bad” example of a goal:

Katie will increase pre-vocational skills from no recognizable skills to a level sufficient for inclusion in vocational training as measured by the following objectives…objective #1 – When given a task at an appropriate level of difficulty, Katie will attend to the specific task for at least 10 minutes with a maximum of 5 redirections….

Katie will increase her pre-vocational skills from her current level of performance to a more independent level as measured by the following objectives….objective #1 – When given a vocational task that has been identified by staff as an appropriate level of difficulty within a vocational setting, Katie will attend to the specific task for at least 10 minutes with a maximum of 5 verbal or physical redirections….

What differences do you see between these two goals?

The first example makes me beg the question of – in whose judgment are there no skills recognized? Additionally, the first example assumes that BEFORE Katie is able to be included in vocational training – she must reach the objectives that follow…an absolute deficit-model of thinking! She must do something about what she doesn’t know/do now – BEFORE she can attempt the activity that we are trying to make her good at? And, furthermore, she needs to do a “task” (not defined, except to say it is “at an appropriate level of difficulty”), “attend” for a period of time (probably randomly chosen), with no more than 5 redirections…what type? Verbal? Physical? Gestural? Modeling?

In the second example, the reference to Katie’s current level of performance (which would also be written as a part of the IEP in a positive way as shown above in James’ example, and detailed about what she can do vocationally) – is a much more positive way to say what we are working on with Katie than saying “no recognizable skills” as in the first example. The objective is written with the assumption that the team has decided what is to be worked on and appropriate to Katie’s current level of performance and goals, and the prompts that the adults are using to keep her engaged for at least 10 minutes are described. The ownership, again – is not only on Katie, it is additionally on the team that is supporting her and figuring out what works best in the situation.

My attempt in this post is to show the power of language during IEPs. It can either open up minds for thinking about possibilities for kids, or do just the opposite by thinking how many deficits they bring to any situation. Thinking, talking and writing in these ways during the IEP process makes a world of difference. Dreams and goals are such positive things…it is time we start writing them down in IEPs in ways that reflect that understanding.